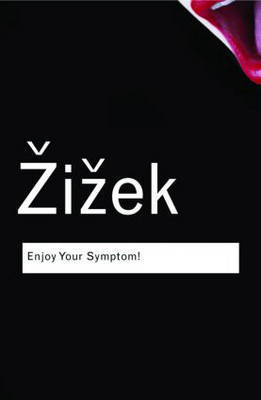 Enjoy Your Symptom!: Jacques Lacan in Hollywood and Out

The title is just the first of many startling asides, observations and insights that fill this guide to Hollywood on the Lacanian psychoanalyst's couch.

Zizek introduces the ideas of Jacques Lacan through the medium of American film, taking his examples from over 100 years of cinema, from Charlie Chaplin to The Matrix and referencing along the way such figures as Lenin and Hegel, Michel Foucault and Jesus Christ.

Enjoy Your Symptom! is a thrilling guide to cinema and psychoanalysis from a thinker who is perhaps the last standing giant of cultural theory in the twenty-first century.

Introduction to the Revised Edition Introduction 1. Why Does a Letter Always Arrive at Its Destination? 1.1 Death and Sublimation: The Final Scene of City Lights 1.2 Imaginary, Symbolic, Real 2. Why Is Woman a Symptom of Man? 2.1 Why is Suicide the Only Successful Act? 2.2 The "Night of the World" 3. Why is Every Act a Repetition 3.1 Beyond "Distributive Justice" 3.2 Identity and Authority 4. Why Does the Phallus Appear? 4.1 Grimaces of the Real 4.2 Phallaphany of the Anal Father 5. Why Are There Always Two Fathers 5.1 At The Origins of Noir: The Humiliated Father 5.2 Die Versagung 6. Why is Reality Always Multiple? 6.1 Is There a Proper Way to Remake a Hitchcock Film? 6.2 The Matrix, Or, the Two Sides of Perversion Index