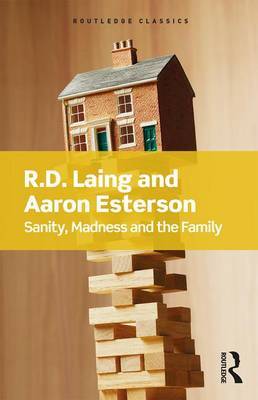 Sanity Madness and the Family

In the late 1950s the psychiatrist R.D.Laing and psychoanalyst Aaron Esterson spent five years interviewing eleven families of female patients diagnosed as 'schizophrenic'. Sanity, Madness and the Family is the result of their work. Eleven vivid case studies, often dramatic and disturbing, reveal patterns of affection and fear, manipulation and indifference within the family. But it was the conclusions they drew from their research that caused such controversy: they suggest that some forms of mental disorder are only comprehensible within their social and family contexts; their symptoms the manifestations of people struggling to live in untenable situations. Sanity, Madness and the Family was met with widespread hostility by the psychiatric profession on its first publication, where the prevailing view was to treat psychosis as a medical problem to be solved. Yet it has done a great deal to draw attention to the complex and contested nature of psychosis. Above all, Laing and Esterson thought that if you understood the patient's world their apparent madness would become socially intelligible. This Routledge Classics edition includes a new Foreword by Hilary Mantel.

R.D. Laing (1927-1989) was one of the best-known and most controversial psychiatrists of the post-war period. After a short period as a psychiatrist in the British Army he moved to the Tavistock Institute in London in 1956, where he worked alongside leading psychotherapists such as John Bowlby and D.W. Winnicott. In 1965 he co-founded the Philadelphia Practice in London, where patients, doctors and staff mixed freely without hierarchy. His many books include The Divided Self, Self and Others and Knots. Aaron Esterson (1923-1999) was an existential psychoanalyst and family therapist, and with R.D. Laing helped found the Philadelphia Practice.

Preface Preface to the Second Edition Foreword to the Routledge Classics Edition, by Hilary Mantel Introduction * The Abbotts * The Blairs * The Churches * The Danzigs * The Edens * The Fields * The Golds * The Heads * The Irwins * The Kings * The Lawsons Appendix Index