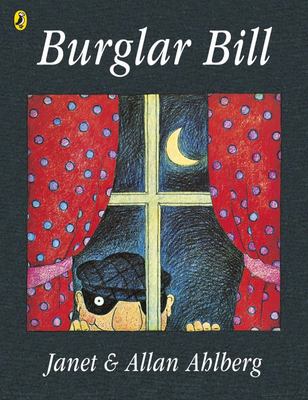 Everything in Burglar Bill's house is stolen, from the toast, marmalade and coffee he has for breakfast to the bed he sleeps in.

One night when he is out burgling, he comes across a box with holes in the lid on a doorstep. He picks it up of course and when he gets home he discovers, to his horror, that he has stolen a baby. Then one night he is disturbed by a burglar - Burglar Betty. She is the mother of Burglar Bill's baby. Bill and Betty decide to reform and live honest lives. They return all the stolen goods, get married and live happily ever after!

This classic picture book by Janet and Allan Ahlberg was first published in 1977.

Janet Ahlberg (Illustrator)
Janet Ahlberg, along with Allan Ahlberg, created some of the world's most popular picture books, including EACH PEACH PEAR PLUM and THE JOLLY CHRISTMAS POSTMAN, both winners of Greenaway Medals, and THE BABY'S CATALOGUE, inspired by their daughter Jessica. Janet died in 1994.